The ELE USAL HINGGAN is located in Ulanhot, Hinggan League, Inner Mongolia. It is franchised center of University of Salamanca. Through a professional team of teachers and a rigorous teaching system, the College strives to provide every student with the highest quality and the most pure Spanish language teaching. At the same time, the ELE USAL HINGGAN is the only Spanish level examination center in Inner Mongolia.

The University of Salamanca is the oldest university in Spain and one of the four oldest in Europe, which also has a long tradition in teaching Spanish as a foreign language.

The ELE USAL is located in beautiful Ulanhot. Ulanhot, which means “red city” in Mongolian, is the place where the Inner Mongolian Autonomous Government was founded. It is the residence of Hinggan League Committee, League Executive Office and the political, economic and cultural center of Hinggan League. The College, in cooperation with Hinggan League Education Bureau and many local schools, has introduced Spanish courses to promote Spanish in Inner Mongolia and make more people learn Spanish culture. 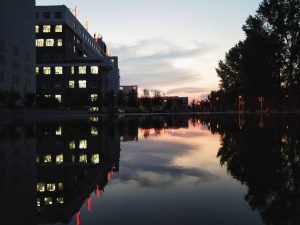